This Is Why I Decided To Start Talking About Cancer

How are fighters expected to talk about their cancer, when sometimes they are silenced or pressured from even bringing it up? There will be people who will treat cancer as a whisper word. Here's why you don't have to let them get to you.

It never occurred to me that I wasn’t supposed to talk about cancer.

Perhaps I didn’t get the memo.

And certainly, nobody told me I wasn’t supposed to make a webcomic about having cancer either. But I did end up making a comic about having cancer, and I went a step further to try to make funny, then made it weird by including animals instead of people. It wasn’t until I started putting the stuff out there that I realized that I was breaking a rule of sorts.

Whenever my comic stretched beyond the boundaries of cancer support groups and cancer-focused social media and into a general audience on sites like Reddit and Imgur, the responses went from high praise to mixed responses...and sometimes, utter shock:

“WTF?” “This isn’t funny.” “This comic is hilarious…said no one ever.” “Where is this even funny at all?” “Please learn to make funny comics instead of displaying this shit-show of horror.”

I have to admit, I found “shit-show of horror” rather funny.

But when I share my comics with the cancer community, it is applauded and referred to as “amazing”, “hilarious”, “spot on”, “beautiful”, and “capturing exactly what I’ve always wanted to say”. I started getting emails and private social media messages. Lots of them. I’ve been told several times by people that the comic was the first thing to make them smile in months. I still get daily messages thanking me for being a voice that others don’t feel like they have.

So why is it that , outside of the cancer community, I’m met with such anger? I came to learn from the emails and some personal experiences, that when many people are diagnosed with cancer, there is often this pressure to shut up about it. It’s an unspoken rule that cancer is supposed to be a private thing. There is shame connected to getting sick, and many cancer peeps go into a secret life of pain and suffering.

Cancer is the other “C word”, that thing you’re not supposed to say in public.

The C word is something you can invoke to kill the mood at a party. It’s a word that can choke out conversation and turn a recently diagnosed person into someone to pity or be avoided. “Cancer” has come to be synonymous with death and suffering.

But there are more and more cancer peeps who think that this ‘unspoken rule’ is bull-crap, and should be broken. I think so too. There is so much good that talking openly about cancer can do, such as awareness, prevention, and support. Yeah people, deciding to not be silent about cancer can actually save a life, because your story about your symptoms and warning signs might cause someone else to get screened early enough to prevent a late stage cancer from occurring.

So why do I do a silly comic strip about an owl with cancer? Well, quite simply, I want to tell my story in a way people might actually listen, but also empower other cancer peeps to share their story too. I just believe something as life-changing and complex as a cancer diagnosis is something that shouldn’t be suppressed.

I also believe we need to have permission to laugh about this thing, and laugh often. Humor is so key when you’re getting poked, probed, scanned, burned, poisoned and cut up. And being able to laugh about it all takes the edge off and brings people together so no one suffers through cancer alone.

So yeah, cancer peeps are speaking out, whether it makes you uncomfortable or not. And we’re going to be crazy-honest about what it’s like, and we’ll probably laugh our way through it too.

Because being pressured to be quiet about our diagnosis is just…offensive. 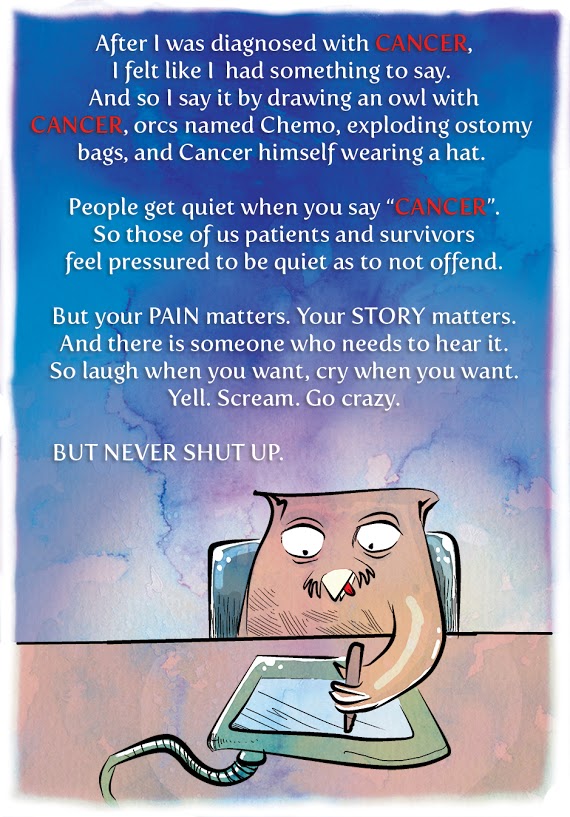 Have you gone through a similar exchange after bringing up cancer? Share your experience in the comments below!

Emotional Support
We may include affiliate links based on our staff and community recommendation when applicable. Prices change often and may not reflect what's online.

Three Things I Wish Someone Told Me Before Lymphoma

5 Things Nobody Tells You About Chemo-Induced Hair Loss

A Post-Cancer Letter To Pre-Cancer Me

Random Acts of Kindness Have the Power to Change Lives

For Cancer Patients, "Little Requests" Can Mean Everything