Costumes Helped Me Cope With Cancer, Chemo, Followed By More Cancer and Chemo

It was a dark and stormy night, and I’d been getting pains in my abdomen…

Just kidding. It was actually a nice sunny spring. Los Angeles. 2017. Every few weeks, I experienced dull pains in my upper stomach, but they were sporadic and I thought nothing of them - until a few months later when I noticed my swollen belly. Uh oh, could I be pregnant? Nope, a First Response test quickly discredited that theory.

Suddenly most foods repulsed me, and my taste buds were malfunctioning; everything tasted like dirt. Something major was obviously going on. I checked into the ER at Cedars Sinai and they kept me overnight for tests. Blood panel. Ultrasound. X-rays. CT Scan. The doctor on duty said it seemed like a gallbladder issue, but we’d have to wait for the results to know for sure.

After a sleepless, restless night, I awoke to the worst news of my life.

“Your results are in. You have cancer."

I spent the afternoon sobbing. Would I die within a couple years? Months? Weeks? I tried to process the bomb that just detonated in my face, but the information didn’t compute. I was only thirty-six. I had no family history of cancer. And I’ve run four marathons. Plus, I hadn’t yet accomplished my goals of buying a house or rescuing a dog. How on earth did this happen?

Several hours later, the cancer clouds parted and a magical unicorn named Dr. Andrew Li walked in. He introduced himself as a Gynecological Cancer Specialist and said yes, my scans indicated I may have cancer, but we’d need a biopsy to know for sure.

His kindness, confidence, and quiet composure washed over me like a soothing balm. Maybe I could make it out alive after all?

The next afternoon I had my biopsy, and the following four days were agony as I hovered between, “OMG, I can’t believe I have cancer” and “Nah, there’s no way I have cancer.” My family flew across the country to join me for that fateful little meeting in that fateful little room. My unicorn Dr. Li calmly and kindly delivered the news that, yeah, unfortunately I had ovarian cancer. Stage Three. There were tumors on my ovaries, uterus, spleen, and liver - in addition to the cluster of tumors in my stomach.

Oh, God. A gallbladder problem would have been way cooler.

Dr. Li said I would start chemo immediately, needing nine full cycles (eighteen sessions) and a hysterectomy. Sigh. My hair would fall out AND I’d need my organs ripped out? This was not going to be my favorite year.

I didn’t know what to expect from chemo, but I figured I’d puke all over myself and my head would spin around like Linda Blair in The Exorcist. Thankfully, I soon discovered that chemo was actually uneventful, and sometimes even boring. It didn’t hurt and my head remained intact. I started wearing funny wigs and bringing props to amuse myself, and other chemo patients complimented my wackiness.

The next couple of months were a blur of hair loss, nausea, crying, laughing, cannabis oils, bald jokes, and weird food cravings. (Think: a jar of pickles for dinner.) In early July, after nine chemo treatments, it was time for my hysterectomy. In addition to removing my ovaries and uterus, Dr. Li had to take out my spleen because the tumors had killed its blood supply. I was sliced open from chest to crotch and promptly deleted “wear a bikini” from my Bucket List.

I recovered from surgery for nearly three weeks, then resumed chemo for the final nine sessions. By this time, I was totally bald, exhausted, depressed, and worn out. But I kept pushing on and started wearing weirder costumes to chemo. If nothing else, my princess apparel and gangster ensemble were good for a laugh. 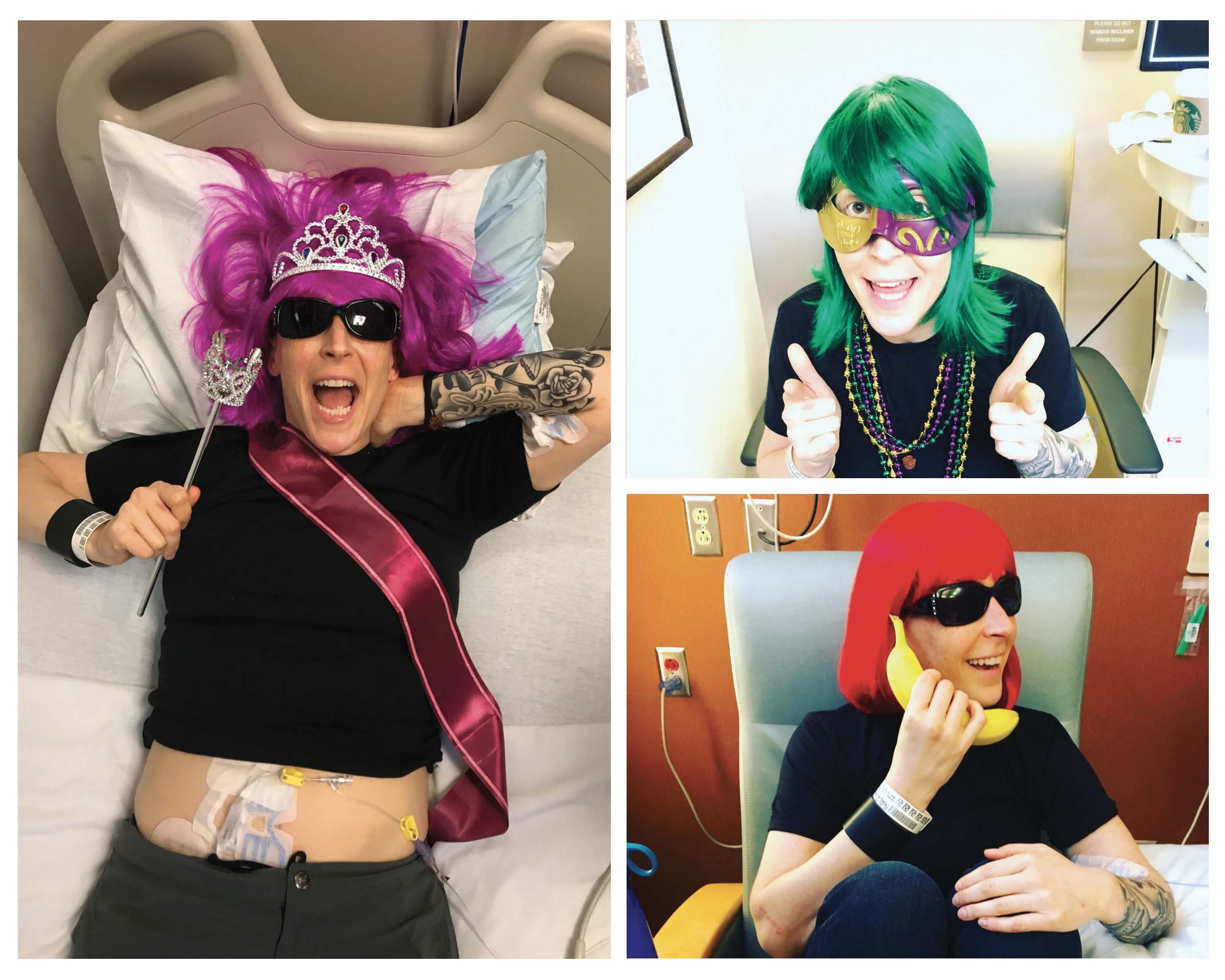 Chemo wrapped up around mid-September and I celebrated the end of a long road. My hair, confidence, and desire to live slowly returned. Since I’m BRCA-positive (the genetic mutation that caused my ovarian cancer), I had a high chance of developing breast cancer. Rather than wait around and hope for the best, I decided to undergo a preventative double mastectomy. The surgery was scheduled for August of 2018, almost a year after I completed chemo.

Unfortunately, my blood work started to look suspicious a few weeks before the mastectomy. A CT scan and subsequent PET scan confirmed that, yeah, I had cancer again - a large tumor was nestled inside my liver.

I cried and threw up and shattered some glassware against the wall. I just made it through the worst time of my life - now I’d need to do it AGAIN? And I already had a recurrence? This didn’t seem to bode well for my future.

My unicorn Dr. Li assured me this wasn’t a recurrence, just some leftover cells from last year we needed to eradicate - a cancer mop-up job, if you will. We canceled my breast surgery and began Chemo 2.0. It was surreal to be back in the infusion center a year later, but I handled it. My costumes were bigger, sassier, and crazier. (Think: sexy cat and Chemo Queen.) My nurses became my friends.

After three sessions, I had outpatient liver surgery to blast away the pesky tumor. It was quick and relatively painless. I only needed a couple of weeks to recover, then I was back at the infusion center for my final three chemo treatments. I powered through my last session in February of 2019, complete with cupcakes and a cake I brought for the nurses and Dr. Unicorn.

Whew. With twenty-four chemo treatments behind me and a clean bill of health in front of me, I could finally get my double mastectomy. During the two-hour procedure, my surgeon removed all my breast tissue and my other surgeon inserted tissue expanders, which we’d slowly inflate over the next couple months, to prepare my skin and muscle for silicon implants. The surgery itself went off without a hitch, but a week later I developed an infection and had to be hospitalized for six days for round-the-clock antibiotic infusions. Unfortunately, a fluid pocket had built up in my right breast, and when the doctor extracted the fluid, she accidentally punctured my tissue expander - so I needed another surgery to replace it. Sigh.

Thankfully, I had no issues with the new expander, and my final cancer surgery will be next month. So now, two years, four surgeries, and twenty-four chemo treatments later, I’m finally on the tail end of this debacle.

To help cope with the insanity, I kept a journal during the entire experience and I’m on the verge of publishing it as a memoir. Writing everything down became extremely cathartic and ultimately helped me make sense of a confusing, overwhelming, and terrifying journey.  The book let me regain control by creating something positive from something devastating.

I now know I can cope with whatever obstacles come my way. And despite the fact that cancer took a lot from me, it gave me more in return. Hope. Inspiration. Gratitude. Purpose. And a million reasons to give back. Because, the way I see it, beating cancer is powerful - but giving hope to people is essential.

Surviving Even When the Odds Are Not on Your Side