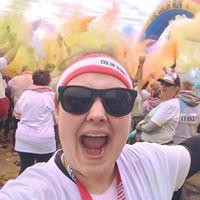 QueenEm
Fighter: Thyroid Cancer (Stage Recurring)
Get and/or give support
Sayre, PA
Female
About Me
My Journal
I am a Fighter

My name is Emilie.
I was diagnosed with Papillary Thyroid Cancer on June 18, 2015 when I was 22 years old. I had a total thyroidectomy along with 22 lymph nodes removed and RAI. August 19, 2016 they said there was No Evidence of Disease.
A day before my one year anniversary of being cancer free they said my levels were increasing.
Finally, after numerous scans and blood tests, they found it... a small lymph node next to my trachea. Within 6 months it began to spread to other lymph nodes.
I had a Modifed Radical Dissection of the right neck where they removed 54 lymph nodes from the right side of my neck. Out of the 54 only 5 were cancerous. The radiologist questioned whether the RAI is working but they decided to give it another shot. Now my tonsils are lighting up on the PET scan...

Discussions (1)
Awareness & Education
How do you deal with people who say ‘atleast you have the good cancer’?
comment (2)
My Story
June 1st, 2017

I had always been a tired kid. I thought it was normal, until I became exhausted. I would have to take naps in my car before I drove home after class. That is what finally got me to see a doctor. She ran test after test and the only thing she discovered was my Vitamin D was low. She finally decided to send me to an endocrinologist. They had known for a while that I had a goiter but it never did much so they never payed any attention to it.

The endocrinologist didn't believe me, he told me I was fine. I walked out of his office discouraged and told the receptionist I would not be making a follow up appointment. She then asked if I would like to come back in 2 months and see a Nurse Practitioner because the doctor was actually leaving because not many people liked him. So, I decided I would come back in 2 months and see what the NP said.

The NP told me she did not agree with the Doctor and that she believes something was wrong and she would figure it out. She ran test after test until she finally decided on doing a needle aspiration of my thyroid. The biopsy was only to rule out cancer so she could move onto her next set of tests. I got a call from the doctors office asking me to come in at 8am the next morning, Friday, June 18, 2015. I should have known what they were going to tell me.

While the nurse took my vitals she asked me if I was nervous. I gave her a confused looked. She said my heart rate and blood pressure were high. That was when it realized I was not there for good news.

The NP came in sat down across from me and said 'I am just going to rip the band aide off. You have Thyroid Cancer.' She kept talking but I have no idea what she was saying. I remember hearing the clock ticking really loudly. I remember staring at it and watching the hands move slower and slower and the ticks got louder and louder. She finally realized I wasn't listening and grabbed my attention. She told me I had Papillary Thyroid Cancer and she wanted to send me to the best of the best and told me about a Doctor in Rochester, NY.

Within the next week I had an appointment in Rochester. Where he, of course, did more tests. He determined I had Thyroid Cancer since I was about 4 years old. When I started getting exhausted is when it started to grow. But he was optimist that it was caught early.

July 1st I have a total Thyroidectomy. During Surgery he found 22 cancerous lymph nodes. He decided that he would like me to also have radiation and that it also be done in Rochester. After meeting with the radiologist I started the low iodine diet and stopped taking my thyroid medicine. Then I have the initial PET scan where he determined That there was still some cancer left behind and gave me 180mcg of Radioactive Iodine.

Then for the next 10 days I had to be in isolation. Luckily I was able to do this in my own home. This was one of the hardest parts for me. Not only was I not able to have any human contact but I was also still in school. During all of this it never once occur to me to take a break from college. I was in my senior year and in a difficult, concentrated program. Taking 10 days off meant missing almost a full course. Luckily my Professor and a friend in the class recorded all the lectures for me. But I could not even think about school while I was in insolation because the RAI ended up making me sick. The Doctor told me if I vomited then I would most likely have to do the Radiation again since the RAI is in liquid form and I had to drink it. Since I was sick from the radiation I was not able to suck on lemon candies like he also told me to do (so the radiation doesn't stay in my salivary glands). So of course I woke up in the middle of the night with swollen, painful glands. That following day I started to develop a dry painful cough. Finally I reached day 10 and I had to take the 2 hour trip back to Rochester. They did another PET scan and it showed the radiation was attacking the Cancer. But now it showed something in my lungs.

About a month later I finally got in for a CT to check my lungs. Luckily there was nothing on the Scan. They think I ended up getting pneumonia and the radiation got caught up in it in my lungs.

At this point the Endocrinologist office I was going to finally got an actually doctor. I had a 6 month appointment which showed the cancer was still there but the radiation was shrinking it. I finally Graduated from college and passed my boards. The following week I had another PET scan.

I have been told that with it spreading to my lymph nodes it will be back. Every six months I go back for more test and pray it hasn't returned. I will have to take hormone replacement for the rest of my life.
But for now I am Healthy and going to make the best out of life.