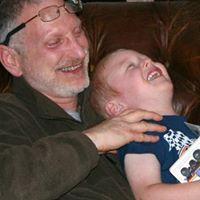 Neal-Klein
Caregiver: Pancreatic Cancer (Stage IV)
Get and/or give support
North Haven, CT
Male
About Me
My Journal
When I Was Twelve...
February 12th, 2018

I was twelve. It was May 12, 1966, a Thursday. We had moved into this house eight months ago on my twelfth birthday.

I walked the three-quarters of a mile to the LIRR station to meet my dad at around 6 p.m. so I could have some time with him as we walked back home together.

When I saw him, I lit up, and could not keep myself from running at him, throwing my arms around him and giving him a good, strong hug. I always lit up when I saw him. He let me carry his briefcase which had his initials on the light brown leather.

After we came home, he took a few minutes to clean up and we had dinner, my dad, mom, and I. My brother, five years older, was at college, about an hour away. After dinner I helped clean up and we watched Jeopardy. I remember my dad had brought home a new Louis Prima album that was laying on the old barely functional HiFi.

We went upstairs to move some furniture. There was a new desk that had to be moved from the extra bedroom into my bedroom. He and I moved it and we had a couple of other things to move around and rearrange. I used my new desk to finish my homework, while he went downstairs to watch T.V. and dance a couple of dances with my mom to the Louis Prima album.

I joined them downstairs for desert and I watched "All In The Family" and then I went up to bed.

During the week, each day my dad’s wind up BenRus alarm clock went off around five a.m. He would usually hit it quickly so as not to wake my mom too much, shave and shower and get dressed, except for his tie, which he would put on after eating. He would go downstairs for breakfast. Mom usually didn’t get up until a little later. I would get up and have breakfast with him, still in my pajamas.

Just toast and jam, and juice, and he had toast and jam and coffee. He held the toast with two fingers, and rarely got jam on his hand. His hands were bigger than mine, but I tried to hold my toast like he did. When we were done eating, I kissed him goodbye and hugged him, and I went back to bed until I had to get up for school, and he put his tie on and left for work. If the weather was nice or it was just a light drizzle, he would walk, otherwise my mom got up and dropped him off.

This morning when his alarm went off at five, he did not shut it off right away, and it kept ringing until it ran down. He did not shut it. From my room, across the upstairs hall, I heard her say, “Harvey, get up.” I could hear her and in my mind I could see her touching his shoulder like she did when on some mornings he was really tired and slow to get up, which was not often.

“Harvey, get up…Harvey…Harvey? …HARVEY”, each time a little louder and a little more frantic. I sensed something very wrong and got up out of bed and stood in my doorway looking into their bedroom through their open door. Their bed was on the far wall, and I could clearly see from where I stood. From where I was he was on the right, but lying in the bed, he was on the left side. I had a clear line of sight.

He was not moving. He was lying there, but someone had taken him out of his body. I just knew it.

I moved a little closer. My mom grabbed the phone, which was on his side of the bed, and somehow managed to call the volunteer fire department, our emergency number on the sticker on the phone. I don’t know how she managed to keep it together to tell them our address, because I was not even sure I knew my name at that moment. I felt like I could not move from where I was, and I couldn’t speak. My mom hung up the phone, half hysterical and half sobbing.

I didn’t know what to do. In addition to my legs which didn’t seem to know what to do any longer, my stomach had a sick and growing tightness and I had a feeling of goosebumps starting at the top of my head and continuing down my spine to my legs which still couldn’t make up their mind whether they were advancing forward or retreating backwards.

They wanted to run to her and help her and run to him to shake him, to hug him, to kiss him, but they also wanted to run and get the heck out of there because something came into our house during the night and hurt him, hurt him bad, maybe killed him. I didn’t know yet.

Someone or something was in the house during the night, I could feel it, and it took his soul out of his body, and I wasn’t sure it had left the house yet, and I didn’t know if it wanted to take me too. I wanted to run to my dad for protection, and I wanted to get the hell out of there because maybe I was next. I was frozen.

My mom was half hysterical, putting some clothes on, pale as all hell, and half sobbing , half wimpering and muttering.

I think I managed to get my legs to peddle backwards and she might have said get dressed or I just heard it in my head, I don't think she was thinking that clearly. I threw on some clothes, and then ran down to let in the ambulance crew or firemen whoever got there first, and showed them the way up to the bedroom. They started working on him, and I went downstairs to wait.

It was about a half an hour before they took him out and I don’t remember if they pronounced him dead then or after taking him out to the hospital or if they even bothered with the hospital and just took him to the medical examiner’s. I just knew whoever came during the night and took him was probably gone by now but I still was not one hundred per cent convinced.

I WAS convinced, and certain beyond doubt, they did not let him say goodbye and I was extremely mad about that.

I did not get to have breakfast with him. I didn’t get to kiss and hug him goodbye. And I still was not convinced that “IT” was completely gone out of the house yet.

But, I knew “IT” had come into my world and changed everything. I was alone.

My world was turned upside down. One morning breakfast with my dad, then the next morning taken away by "IT". I should have stopped that gurney in the house, I should have gone into the bedroom before they took him out, pushed them out of the way, and hugged him and kissed him goodbye and told him I never loved anyone or anything as much as I did him. I hadn't realized that or ever really thought about that.

And, I did not know that was the end, the final scene in the play, the finale, I did not understand the whole play and if I did I would have clung to him and had a hard time letting go, and they would have had to pull me off of him and they might have needed more than one of them. I was afraid of "IT" and "IT" robbed me, and robbed my family. But I did not know then what I know now. I was twelve. How was I supposed to know?

I could leave this story in my journal file very easily, and not share it. And, some might say it is too personal. I say it IS personal and maybe someone reading it can relate, and in so doing, maybe complete something in themselves that would be beneficial to complete or add something to, it is hard to say what another will do with my story.

Maybe it will help so someone makes sure they DO say goodbye before it is too late, or they DO tell someone how MUCH they love them and how thankful they are that they have been blessed to have them in their life for the time that they did.

Maybe it will help dealing with a child who has to deal with death. Deal with the unnamed fear. Two years before this my cousin died from Hodgkin's Disease (Lymphoma), she was 12. FEAR. And, I witnessed a neighbor in my apartment building having a heart attack in the hallway outside her apartment, which I saw through my apartment peep hole when I heard the noises but was too scared to open the door. FEAR.

Yet, it is a universal story of how a child deals with and feels about death at an early age. Enough.

What you may or may not have picked up from the story is that I walked home with my father on a Thursday the twelfth of May. He died the next morning. And, that was...Friday the thirteenth. Just added a little spook to my already being spooked. You can imagine how in the first few years afterwards, I was a more than a little edgy on any Friday the thirteenth. Okay, I still am, a little, but I try to shhhhhhhhhush it.

I could not have written this without having gone through what I have since Emilee died. The intensity of the grieving for her has opened up places in me that were not there before and somehow allowed me to see things, remember things, feel things, to a depth that I could not before.

It is as if space were made, more space, for loving both myself and others, to have compassion for myself and others. It is difficult to learn that somehow I can hold both the grief and the joys of the memories together, and not get stuck there, or lose myself in the process.

Because I do not plan on dying, nope. I will just vibrate on to another frequency and see all of them, again. And, no one, not even Death itself, will ever rob me of a final hug. Ever again.