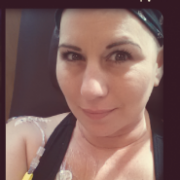 I am a Survivor

I have a 20yr. history working with At-Risk children/youths. I'm in my 2nd year as a CASA and enjoy being a mentor.

My family is small but fills my heart completely. I have a wonderful man named Rich, who enriches my life and is TRULY, the love of my life. A proud step-mom to his daughter, Anisa who brightens the room with her beautiful smile and lights up a room with her energy. She is our sunshine! My mother-in-law, Gloria, also a breast cancer survivor is my Shield and her dog Toby whose my lil buddy.. A great leader and rock to our family. She is such a Blessing to my life with support and direction during my journey. My brother and sister in law, Danny and Bridie are a sweet duo and bring humor and sensibility to my life. We always get together for Sunday dinner which I look forward to each weekend.

We have 3 dogs named Sofie (English bull dog), Cosmo (Jack-Chi), Missy (Pin-Chi) and our cat Lucy (tabby)that bring daily adventures and are like our children. Always keeping us on our toes. Literally!

My immediate family is my mother, Verna who is such an inspiration to my life whose faced many chances of death and a overcomer. I have two younger sisters, Juanita (middle) whose life is never dull and is expecting her 5th child.(its a BOY) in October. My baby sister, Ruby is very Special to me, she is a hard-worker, self-less and has always supported and rooted me on in life. She lives the closest to me in our family. My father is living and resides in Nevada. I speak to him often and I pray he moves back to Cali so we can spend more time together.

My 3rd family is Healthcare Realty in Fountain Valley, CA. The team I work with always supportive, open to communicate and overall is AMAZING and I enjoy coming into work.

I have a education in Human Services and Criminal Justice. I'm well rounded, like a challenge, a 13 year Ovarian-cancer survivor and love to be of service.

I have a 20yr. history working with At-Risk children/youths. I'm in my 2nd year as a CASA and enjoy being a mentor.

My family is small but fills my heart completely. I have a wonderful man named Rich, who enriches my life and is TRULY, the love of my life. A proud step-... [Read More]

Finished treatment less than 5 years ago

Has anyone experienced eye tearing? Is it a side effect from chemo? My oncologist reduced one of my poisons last treatment... [Read More]

Anyone taking natural estrogen blockers and been successful?

2 years and side effects

Last Thursday, i became violently sick from pushing myself with driving an extra 2 to 3 miles a day, started classes, tuesday & wednesday which turned to be 17 hr days, to a 70 hour week. Now, bone and muscle pain, nausea, tremors, fog headed, and chronic pain. Off work for 2 weeks to recoup. I feel scared, anxious if its returned. Testing to come. Prayers please.

I cannot believe that in August I had my 1st Chemotherapy infusion treatment and TOMORROW, October 30th I have my LAST treatment! Its amazing to me that I've come this far and have made it! After tomorrow I will go through the hardships that come with after treatment, yet know that after this treatment I will be CANCER FREE!!! I will then be able to get my breast expanders replaced with silicon and then have two procedures to complete breast reconstruction. I cannot wait to get back to my normal daily regimen, gym, work, daily running/walks, and going back to college for a RN degree. This experience has empowered me to give back to others. I encourage all of you fighters and survivors to give back, share your story and INSPIRE others. I'm here for whoever needs me. We are all apart of each other in one way or another. TOMORROW will mark a very special day when tomorrow comes.

KICKIN CANCER IN THE FACE

When I had my hysterectomy in 2006 due to ovarian cancer I was placed on Estradiol, a hormone replacement and told there was a chance of breast cancer due to my family history. Never did I imagine it'd come true eight years later. I noticed some changes to my left brast and found a "new" lump. Rich, my boyfriend pushed me to make an appointment due to my fear coming true. In February I saw the doctor and he agreed he felt it then sent a Referral for a Mammogram and US. I had stomach surgery in February and healed up in April so I was occupied dealing with that health issue. So in May 2014 I finally went in for my Mamo and US. I received my results that "something" wasn't right. So then onto a core biopsy where the suregon asked how long ago my last Exercised biopsy was and I replied, "in 2007" and it was negative and I told that surgeon that he didnt get it all. I still felt a small ball deep inside my breast and he said I was imagining things. So here we are, I received my results from the biopsy as IDC estrogen positive/progestrogene positive and HER2 negative. Clinical stage 1 grade 3

When your told you have cancer and your a survior of cancer it isnt easy.  This day of diagnosis was June 20th and I still feel like its not happening. All the Doctors

appointments, medical tests and now surgery for a bi-lateral masectomy July 15th with immediate reconstruction is coming up too fast.

I don't know what to expect as Im LIVING moment by moment it seems. Im happy and appreciate life as I always have. Its the chance of it being stolen is the scary part. I finally have all I could ever want. A house to call HOME, a new car, a loving man and daughter, amazing in-laws and a wonderful career. I will KICKCANCERIN THE FACE!!! It will NOT take control of my life.