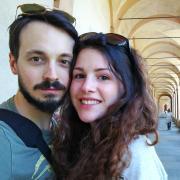 annalaura
Survivor: Ovarian Cancer (Stage III)
Get and/or give support
, VENETO
Female
About Me
My Journal
I am a Survivor

I'm a 28 years old cancer survivor. I was diagnosed with ovarian cancer at stage III c in August 2012. In 2011 I lost my mother to cancer (lungs-pancreas). Now I'm happily in love, I enjoy travels and photography. I share a blog with my boyfriend, www.facebook.com/NaDaFotografie, and one day we'd like to develop a photographic project about cancer fighters.

Finished treatment less than 5 years ago

From Guilt To Insecurity To Finding Happiness After Cancer (It's Possible)

My story starts on June 2010, when my mum was diagnosed with pancreatic – and lungs – cancer. At that time I was 20 years old, I had just started university, had a new city to discover, new friends, new projects in my head and I felt like I finally had the future in my hands. This tragic news was truly unexpected for me and my family, all of a sudden I didn't know what to do, I had never faced anything similar before. Our life changed. In the very first period we tried to lessen the whole thing, but soon we had to face the truth. My mother underwent surgery then started her therapy (both chemo and radiotherapy), my father was often silent, distant or he forced a smile to try and reassure me and my brother, as for me, I tried to escape, mentally; I couldn't bear all that agony my mother was going through. I withdrew into myself, into my own little "safe" world, I also stopped going to classes and I was often alone as my mother became every day more and more fragile, weak, diaphanous. Six months. Six months and she wasn't there anymore, she was gone, without me being able to do anything useful. On January, 5th at 3 a.m. she passed away. I can barely focus my mind on that night or on any other memory about her without childishly crying. She left our family tattered, and an abyss in my soul that won't ever be filled again, but even in such an hard moment she showed me what "strenght" means, what Love is.

After about one year and a half, I was diagnosed with stage 3c ovarian cancer, at age 22. I knew I let myself go, I knew something was wrong with me, but I did nothing. It was like my feeling of guilt for not being able to help my mother had developed in a physical form, something I could touch and I let it there like I knew I deserved it, because I didn't care. It goes without saying that my father and brother were wasted by the news, but me, surprisingly, I was calm. I discovered I could find my strenght in them. I didn't want them to get worried for me so I just tried to be as happy as I could, smiling, singing, making biscuits, doing other creative stuff while I was forced at home.
Actually, after my diagnosis, the main concern for me was about my hair. I know it may seem stupid now, but I always had very long hair and I couldn't stand the idea of losing it. Of course at the end I had to deal with it but still I can remember my initial worry.

I have to admit I was kind of lucky, my chemo wasn't so devastating as my mother's and I felt very bad only a few times, most of times I was just incredibly tired and forced to bed. I needed three surgeries (a scar of almost 10 inches) and chemotherapy but I managed to survive. One year of my life was gone. The worst part still had to come yet: seeing all of my friends and colleagues going on with their lives while mine had stopped was terrible. I had win one of the hardest battle of my life but inside me I felt unsuccessful. My friends already graduated, someone was planning a wedding, someone else also had kids while I was there suspended in a state of limbo, without any plan or ambition for my future.
That was surely the worst part. Incredible, isn't it? I was cancer free and that wasn't the good part. Crazy. It took me a lot to get back in the game. I couldn't find the concentration to finish my studies, I lost contact to most of my friends and spent most of the times at home with sad thoughts on my mind. I don't know how I lived in those days, I know it was difficult to go through those months, but with the support of my family and the friends left I did it.

Now I can finally say it was worth to go through all that sorrow and not give up. It doesn't mind how long it takes, just keep fighting, keep going on even though you can't see anything beautiful ahead of you, something precious will come. To me, a positive attitude has helped really a lot as long as creativity and the love for my dear ones.
Another great distress of mine was the Hormone replacement therapy and the infertility issue. I had both my ovaries removed and although I never seriously thought of having children before, at that time I couldn't stop thinking no man would ever want to stay with me since I can't give him a child and create a family together. Now I know this doesn't make much sense but I wasn't so rational in that moment. Then, two years ago, I met Davide, an incredible man who couldn't care less of my infertility, instead he gave me – and still gives me – the strenght to accept what happened and he made me focus on what is really important in life, he likes me as I am and makes me feel loved everyday, and I feel so lucky to have met him and to share life with him.

What I learned so far: life is life, unpredictable, it doesn't mean it is always beautiful but it is worth to fight for; hair grows back, and you won't complain about it anymore - almost; positive thinking is essential, it gives you and your family the strenght to go on; listen carefully to the signals your body sends to you, prevention is fundamental.
I can now happily say I found a new balance after cancer, it was not easy and at times I thought it was impossible, but I'm here to share my experience and show it's possible to be happy again if you don't give up, may it be helpful for someone out there.